Yubing Liu received a scholarship to come to the U.S. and work on germ cell differentiation and signaling from the Chinese Scientific Council. Yubing is from the Animal Genetics and Reproduction division of the Department of Animal Science and Technology at Guangxi University where he received the prestigious Chinese Scientific Council award. This highly competitive award will allow Yubing to perform cutting edge research to improve germ cell formation from human and animal embryonic and induced pluripotent stem cells through genetic manipulation for the next two years in the lab of Dr. West. Yubing’s interest lies in the generation of transgenic animals, particularly the buffalo. Yubing has worked on the development of novel reporter system, conditional knockouts, systems to produce better livestock and now brings his skills to the United States. We are excited to have you join the team Yubing. 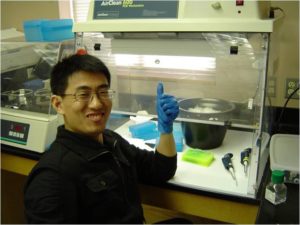 Peach has been one of the top students in class al

Had an amazing time today at the Bridging Centers

Getting ready for Halloween on Monday!

Taylor and Snook during our standard West laborato

We are looking for an amazing post-doctoral fellow

I was walking in the Vet School hall today and saw

We love our cephalopods!

I got to hold Thomas Hunt Morgan’s Nobel Prize t