Induced pluripotent stem cells (iPSCs) are a novel class of stem cells that can turn into any cell type in the body, similar to embryonic stem cells. Unlike embryonic stem cells, these cells do not require the controversial step of isolating cells from a developing blastocyst. iPSCs can be generated from almost any cell in the body by the overexpression of a cocktail of six reprogramming transcription factors (POU5F1, SOX2, NANOG, LIN28, KLF4 or C-MYC). An advantage of these cells is that they can be generated from patient cells making cell therapies patient specific. Patient specific cell therapies will enable cells to be transplanted without the threat of immune rejection from the body that would kill the cells, thus stopping the therapy, or the need for the patient to be on immunosuppressive drugs, which in many cases can be as bad as the disease itself. 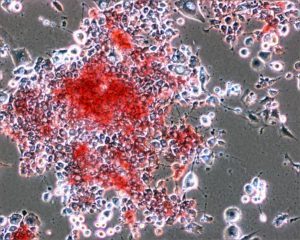 When iPSC technology was first introduced in 2006, the possibilities were clear and exciting. However, like all new technologies, there were evident hurdles including the continual overexpression of foreign genes, some of which have been strongly linked to cancer (e.g. C-MYC), and the use of viruses to introduce these genes. Through innovative approaches, scientists over the last few years have overcome these hurdles. There are novel approaches to introduce these factors using episomal approaches that do not require the use viruses and eliminate continued overexpression of these genes that could lead to abnormal development of cells derived for cell therapies. Critical advances have also been made to eliminate the use of some of the genes that are closely associated with cancer through strategies such as adding small molecules. The continual innovation and development of stem cell technologies is bringing the potential of safe and efficacious therapies ever closer to the millions of patients in need.